The Old Parliament building, which now houses the Presidential Secretariat and the Ministry of Finance, is a prominent landmark that cannot be missed when passing Galle Face Green in Colombo Fort. This magnificent architectural structure symbolizes its historic importance even amidst the surrounding giant constructions erected in later years. The building housed the Sri Lanka Legislative Council for 53 years till the new Parliament was opened at Sri Jayawardenapura Kotte in 1983. Hence, it was in this building that the vital discussions and
debates on the rebuilding of a post-independent Sri Lanka took place.

The idea to construct this building was first mooted by Sir Henry E. McCallum in 1912. The proposal made by a committee to construct the new building for “the Secretariat, Council Chamber and Government offices on reclaimed land at the Northern end of Galle Face” was accepted by the Government in 1920 and the plans for the building with three floors was approved in April 1925. The building was designed according to the ‘Ionic Style’, one of the five architectural orders, and resembles the temple of the Greek Goddess Athena, which stands even today on the Acropolis hills in Athens. Chief Architect of the Public Works Department, A. Woodson, was responsible for the design of the old Parliament which incorporated an open outlook to ensure maximum ventilation from the sea breeze flowing across the Galle Face Green. Opposite this Neo-Baroque classical sandstone structure, one can still see the old cannon, located on the edge of Galle Face, pointing towards the Indian Ocean. This perhaps is a reminder that it was once a military stronghold.

In March 1927, an estimate of Rs. 400,000 for the whole scheme including the Secretariat was forwarded to the Government for sanction. Later it was revised by the Public Works Advisory Board to Rs. 450,000 including extra expenses for lifts etc. The required sanction was given in June 1927.

The building is built of solid stone. Special precautions were taken to reinforce the foundation as it was to be built on reclaimed land from the Beira Lake, and the entire
structure was put up on heavy reinforced concrete piles.

The stone for the basement had been quarried at Ruwanwella, an inland town about 40 miles from Colombo. A special quarry was acquired for the purpose of making approximately 1,000 tons of stone and brought to the site. Another 530 tons of stone were brought later to be used in the framework. The heaviest single girder was 51 feet long and weighed 7 tons.

At the end of 1927, the steel framework, concrete floors and the brick walls were completed. A flight of 20 steps, each 50 feet wide, leads to five large doorways of the main entrance to
the hall. Behind it is a corridor 30 feet wide, designed in a classically simple, yet very attractive style.

In 1997 this building was heavily damaged due to the bomb explosion occurred at Galadari Hotel and restoration of the building has done by the Department of Building and restoration
work had been completed in year 2000.

There are four floors,

(Including Corridors, Washrooms & Other Common Area)

The outside dimensions of the building are, 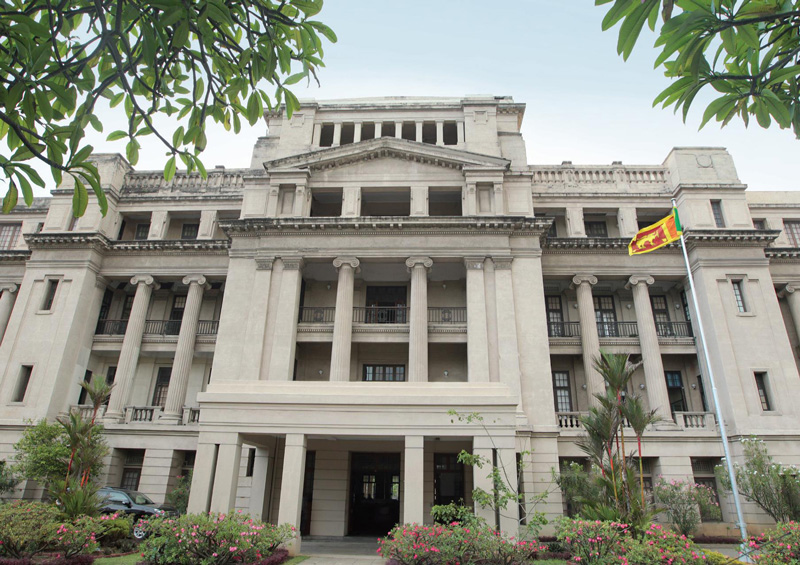